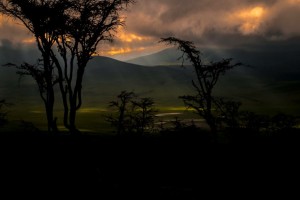 Before I continue with tales of my exciting travels through Tanzania, I must relate my role in saving four young Americans from what would have been certain death in the harsh African environment.
My intrepid companions, DOT and TOFU, and I were returning from a long day out in the bush, having had our fill of wandering wildebeest (one can weary of wildebeest after an hour or two – they don’t do a lot and they don’t really have any ‘cute’ factor) when our driver screeched to a halt (a slight exaggeration, perhaps) upon seeing another safari vehicle at the side of the road with five people standing next to it. Bosco, our driver, spoke to the other driver in Swahili (in which I am now almost fluent, since I can ask for two OR three beers AND say ‘Please’ and ‘Thank you’), then asked us if we would mind giving the four passengers a lift back to their campsite because the suspension on their vehicle had broken. ‘Of course,’ I cried out straight away (being the natural leader of the group) and welcomed the young people into our own vehicle after directing DOT and TOFU in the rearrangement of our luggage, which involved no discomfort on my part but necessitated everyone else having to squash up, and off we set.
All the way to the camp, I was imagining what might have happened to them if we hadn’t stopped – death by starvation (although one of the group might have taken a little longer to starve than the rest) or an attack by lions in the night (wishing for a change of diet from wildebeest), but when we got to their campsite, all I can say is that either form of death would have been preferable to what they would face that evening! DAAAHHLINGS!! Positively primitive – small tents, a communal toilet block, such a lack of even the basics – no en suite, no television or mini-bar, doing your own cooking AND washing up! Unthinkable! We left them there and continued on to our own accommodation, which was all one could ask for, including more staff than guests and a view over the Ngorongoro Crater which ‘breath-taking’ doesn’t even begin to describe. 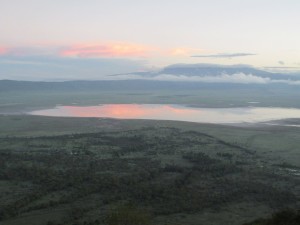 And now I will continue with my insightful TRAVEL TIPS, some of which may surprise you. I had not thought that Tanzania – and the Great Rift Valley in particular – would make me feel homesick for Wales, but there were times when I felt that we could be driving through the Brecon Beacons, such was the scenery – green, lush and mountainous. It was so easy to imagine oneself back in God’s Own Country if one discounted the coffee plantations, the oxen pulling carts, the goats and the Maasai warriors (although the natives of Brecon have been known to get a little wild after a couple of sherries on New Year’s Eve and who could forget Ivor Emmanuel holding off the whole of the Zulu nation with his rendition of ‘Men of Harlech’?).

What other TRAVEL TIPS may be of help? It is always useful to carry a flash drive (memory stick for the less technical) with your own cheerful choice of music on it, such as ‘Mad World’, ‘Fix You’ and ‘Someone Like You’ – this avoids having to listen to Jim Reeves’ ’20 Most Depressing Songs Ever’ at your hotel, including ‘God Be With You Till We Meet Again’ and ‘Life Will Be Better On the Other Side’, which make Leonard Cohen appear like a joyful, life-affirming person of irrepressible jollity!

That will do for now – I do not wish to overburden you with too much information because, unlike the LSG, most humans do NOT have an infinite capacity for retaining information. Usiku mwema, rafiki!