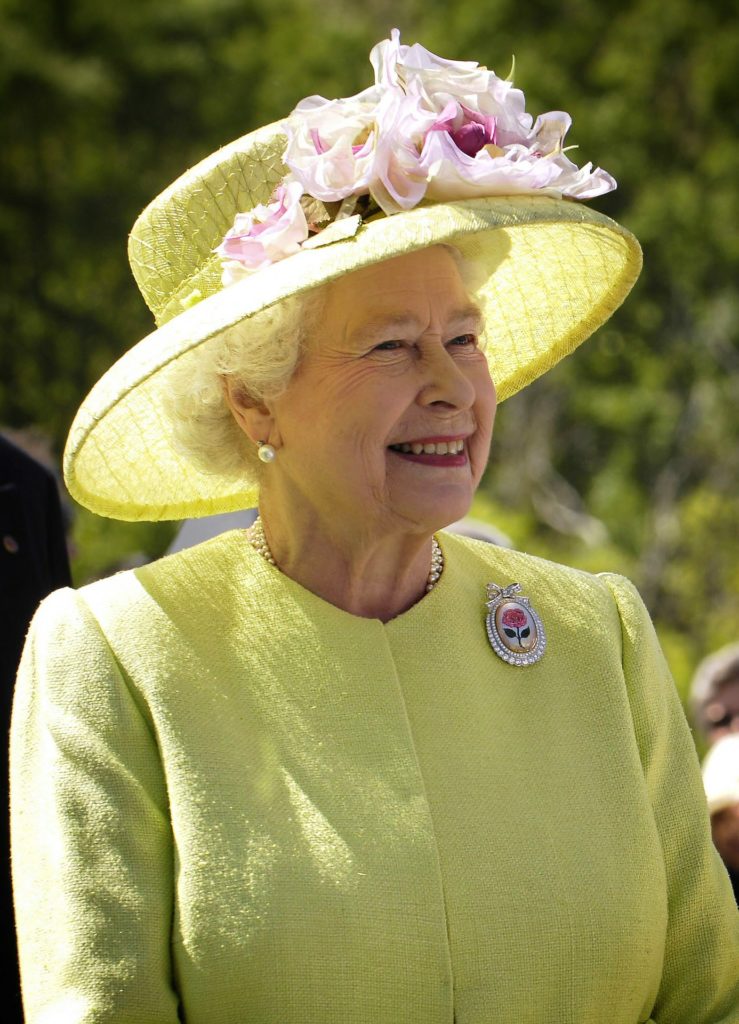 A very merry Christmas to you all! I am delighted to share my Christmas message with you all today, especially since it’s after Her Majesty’s, so you will already have fallen asleep in front of the television stuffed full of turkey or nut roast and several glasses of champagne, prosecco and wine – that’s you stuffed full, of course, not the television – and you will now be ready for some uplifting words of wisdom and support to help you through the rest of the evening and the days that follow until you can fall meekly into 2019!

Even though I have the body of a weak and feeble woman – my doctor might disagree slightly with that description – I have the heart and stomach of a demi-god and can help you negotiate a safe path through the trials of a hectic time until you can relax with a small glass of dry sherry at the end of the day and watch whichever repeats may be offered to you as entertainment. (I can recite verbatim almost every script from Morecambe and Wise!)

I hope you enjoyed Christmas morning, although I suspect many of you were probably up around 4 am with the excitement – and that’s just the adults! – and are now ready to fall asleep again. I hope you haven’t already run out of batteries or found that you bought the wrong size and won’t be able to get any now until tomorrow. If that’s the case, the rest of Christmas night is going to be a disaster, I’m afraid. You’re going to have to resort to Monopoly, Scrabble and Trivial Pursuit instead of Hungry Hippos and Lego robots.
If you went to church, I hope you took a good slurp of communion wine in preparation for the fray.
I shan’t send you a message from God because I don’t know which god or gods you worship, or even if you worship one. That is entirely up to you – personally, I favour the Ancient Greek and Roman ways of worshipping different gods for different things and I particularly like Vesta, the Roman goddess of the hearth, home and family – how can you not worship a goddess who created delightful dishes such as Vesta curry, paella and chow mein? And I think she had a son called Pot Noodle.
Anyway, I digress. The Christmas message I want to send to all of you is one of hope, faith and charity.
Hope that you made it to the end of Christmas day without trying to murder that ageing aunt who insisted on telling you how much better she could have cooked the lunch if only she could stand for long enough, but you resisted the urge to tell her that she should have stayed off the sherry in that case!

Faith in yourself to cater for all the family, including the picky eater, the vegetarian and the vegan, the one who won’t eat sprouts and the cousin who insists on ONLY eating sprouts – just be glad he left straight after lunch to visit his mother!

And charity – the charity to keep your head when all about you are losing theirs and blaming it on you … to meet with Triumph and Disaster and treat those two impostors just the same.
I’m sure I’ve used those lines before … 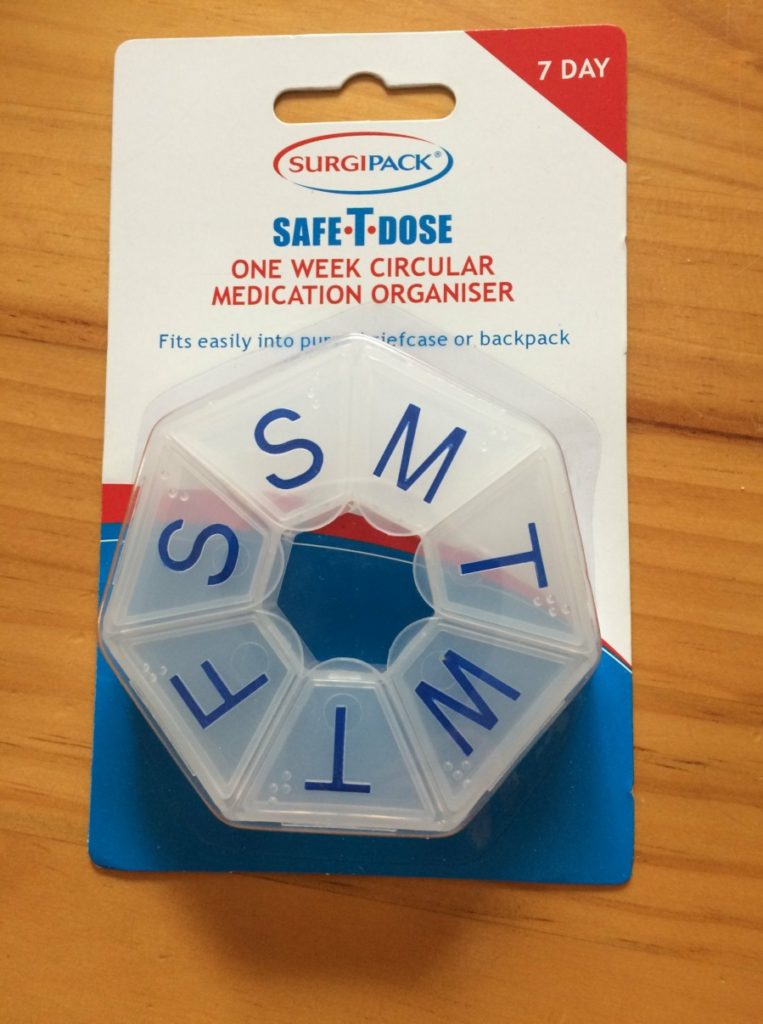 And in case you want to know what I got for Christmas, just look at the accompanying photos to spot the treasure from youngest sibling, brought all the way from Australia.

And you will, of course, enjoy looking at the genuine Armani watches I bought from a 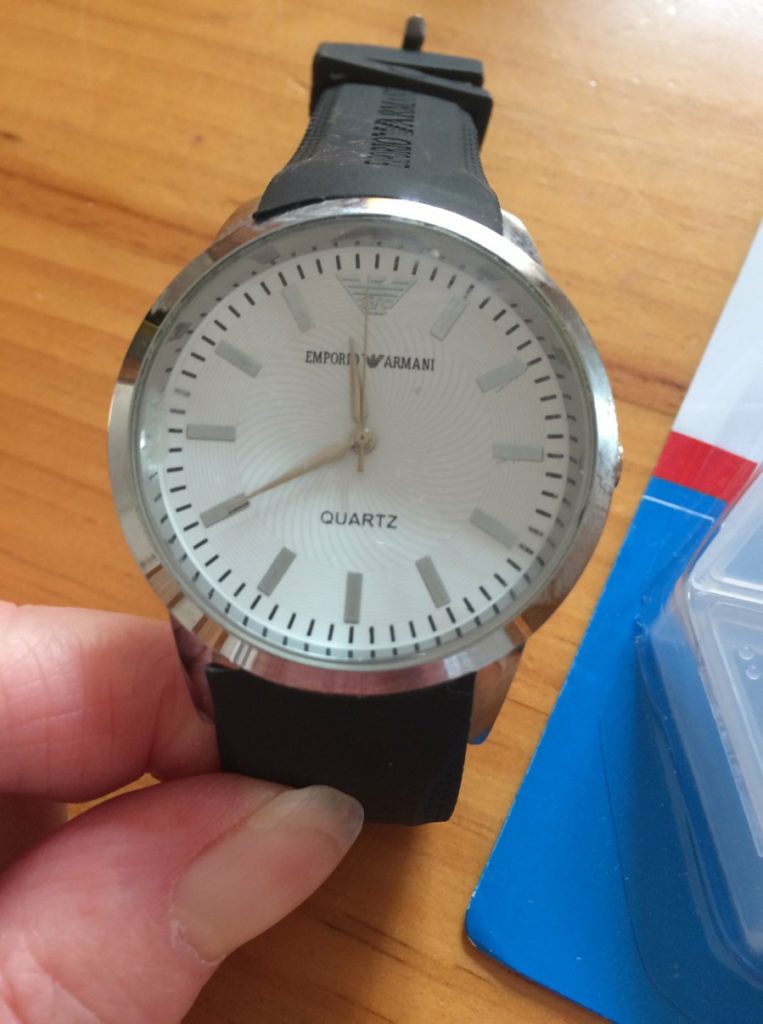 lovely street seller as a Christmas treat for myself, one in black, one in white (genuine plastic watchstraps, and one works on what I call ‘Armani time’, falling behind by about ten minutes every two hours or whenever it feels like it – but that’s what you get for paying a lot of money for something). 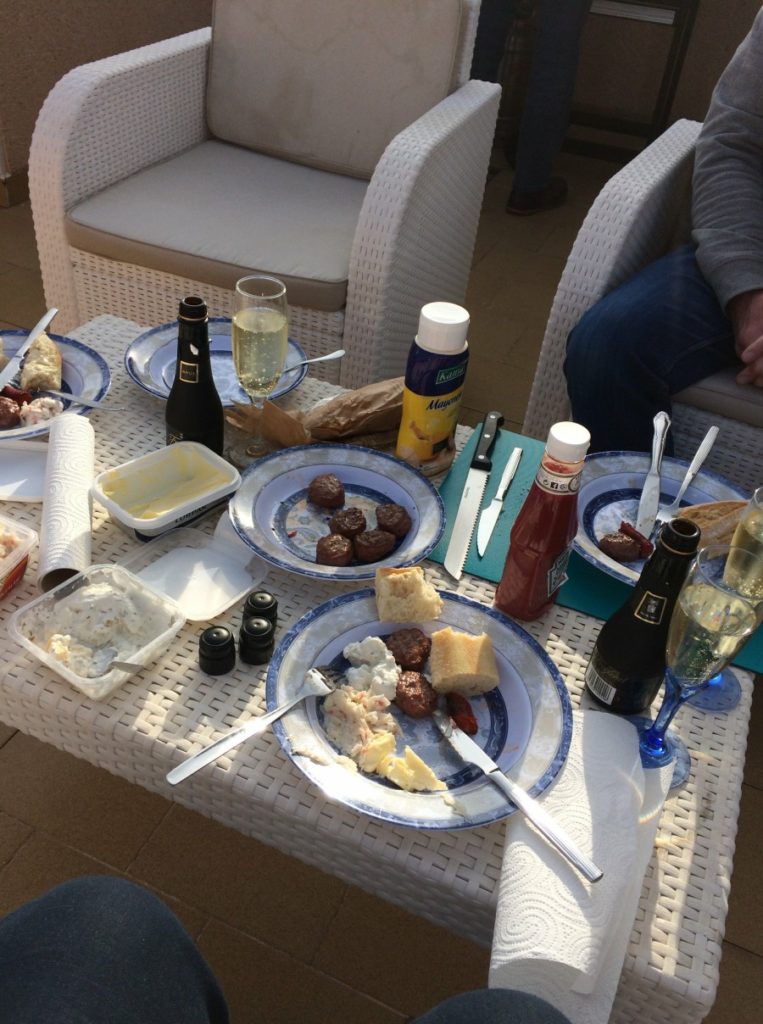 And, finally, Christmas lunch in the sun – not a turkey or sprout in sight!

A very merry Christmas to you all!