Hello, Faithful Followers! Lifestyle Support Guru here after a long absence. Have you missed me? Such wonderful news – today, I went out on a ‘social occasion’ and met up with not one, but two – yes, TWO –acquaintances! However, please keep it to yourselves that we were a ‘ménage à trois’ (so to speak), since we are only supposed to meet one other person, and in a public space, but we were in a garden, so not technically a ‘public’ space, but it was in the open air, so we felt that we were staying within the rules – more or less. 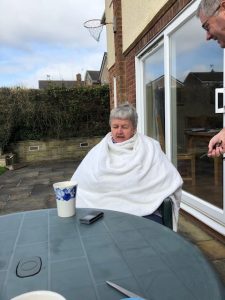 And what was the reason for this ‘social occasion’? An exchange of alcoholic beverages and literary works – in other words, swapping bottles of wine and books. I swapped a bottle of Sardinian white wine and a book about ‘cork dorks’ (wine nerds) for a bottle of Provençal rosé and a book written by an anti-fascist about his exile in a remote region of southern Italy. I think this says a lot about our differing literary tastes and intellectual capacities – I leave it up you to decide who is the ‘lightweight’. 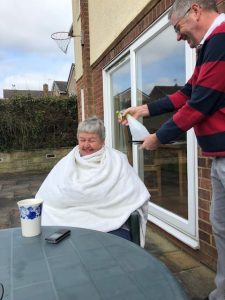 We had a jolly chinwag as Bazza, the Friendly Geordie, (BFG), who has appeared in my stories before, and the LSG sat at the garden table, wrapped up warmly, while her paramour, BSG (Bazza’s Shy Geordie), sat just inside the kitchen door, so should the riot police come charging into the garden, they would find no one breaking any rules. We are a law-abiding lot, even though we compared speeding offences during our conversation!
(It was lucky that it wasn’t a warm spring day, otherwise I would have had to remove my jacket and thus shown that the (new) jumper I was wearing was in sore need of ironing, having not long been taken out of its wrapper, but that is now a secret I can take to my grave.) 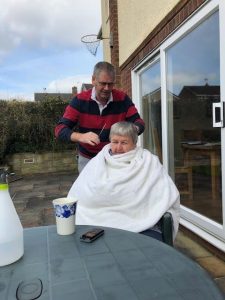 Having swapped our various items, including a bottle of out-of-date beer, which happened to be lying around in the LSG’s kitchen, BFG suddenly asked – apropos of nothing – if I liked hummus! ‘Yes,’ I replied with great enthusiasm. ‘Oh good. Would you like to take some home with you?’ ‘Yes, please.’ I said, thinking that perhaps they had purchased too much on a recent shopping trip and were trying to fob the LSG off with some out-of-date hummus in exchange for the out-of-date beer, knowing that the LSG has the constitution of an ox and would laugh at the idea of wasting something simply because of its ‘use by’ date – this is someone who, only a week ago, safely consumed a packet of microwave rice that was seven years past its ‘best before’ date! (Yes, YEARS!)
But I digress – this hummus was not out of date, but homemade! HOMEMADE! Who knew there was such a thing! I thought Sainsbury’s and M&S had cornered the market in hummus! HOMEMADE! And so a tub packed to its brim with hummus – HOMEMADE! – was duly put into the LSG’s bag along with the rosé and the anti-fascist book – oh, and a book about an Italian detective. 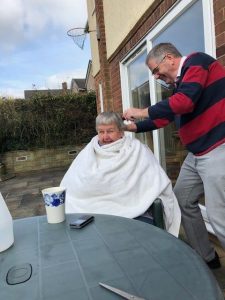 But this was not the end of the surprises at this very convivial social occasion – oh no! BSG then said that, when cutting BFG’s hair in the garden yesterday, he had missed a few bits, so he thought he might get at them while she was outdoors, at which point BFG asked if I would like to stay and watch! I was overcome! Such a personal invitation! And I was told that I could take photos if I wished! There is no end to this couple’s generosity! And to prove how enjoyable this event was, I have attached a small number of photos from the Sweeney Todd Barber Shop (Mickleover branch). I turned down the offer of having my own locks trimmed – I was anxious to get home and taste the hummus – HOMEMADE! – but I am expecting a delivery of meat pies next week