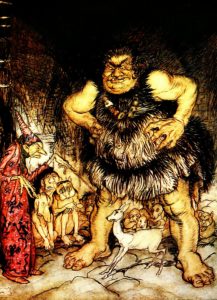 It is difficult to concentrate on reading one’s book about unicorns, ogres, wizards and the like when the conversation next to you in the pub is so fascinating.
Picture a group of about ten people – ranging in age from early twenties to mid-fifties – arriving and settling down close by, resembling rejects from EastEnders with Derbyshire accents. The younger ones (all male) are already arguing, which doesn’t bode well, and one of them is clearly VERY annoyed and, in a whiny voice, keeps telling another in the group to stop being so selfish and to leave him alone. His cause is not helped by his having a squint, so you can’t tell who is the recipient of his remarks. It becomes perfectly clear, however, that none of them paid much attention during Literacy Hour because they only seem to know one adjective (it begins with ‘f’), which they share liberally around them. Or maybe their Literacy Hour teacher also had a limited vocabulary?
At first there is only one woman in the group, but another soon comes along and greets one of the younger males with great delight, saying that she hasn’t seen him for ages before asking him how he had got on in prison (which may explain why she hadn’t seen him for ages). He replies that it was OK, but that he got bullied a couple of times. (He also mentioned something else beginning with ‘b’ that happened to him a couple of times, but I don’t think that’s a topic for polite company.) Now, I don’t consider that I was a ‘weak’ teacher in my former life before I took on the mantle of Lifestyle Support Guru, but believe me when I say that even I would have thought long and hard before contemplating taking on this fine young specimen of manhood – at least two upper teeth missing, a tattoo or three, and a vocabulary where the only word of more than one syllable begins with ‘f’ (see above).

A problem for the LSG then arises upon realising that a visit to the Ladies is needed – but what should be done about the mobile devices – tablet, phone, mobile Wi-Fi device and mobile phone charger (I like to cover all eventualities) that are lying on the table? Rather than packing them all away and taking them to the toilets, thus signalling to the group that I don’t trust them not to snaffle them all while I’m out of sight, I take a deep breath and turn to one of the women (she was the closest) and ask, ‘Would you keep an eye on these while I nip to the loo?’ She gives me a big smile and replies, ‘Of course.’ And yes, dear readers, I married that woman! Ha ha! – of course I didn’t, but I have to admit to a tiny sigh of relief that everything was still there when I returned to my seat. (Mind you, I also checked that they all had full pints when I went to the Ladies, which they’d have had to have drunk before bundling up all my technology and legging it!)
And there you have it, Beloved Believers – never assume that people who look like villains really ARE villains. They may just be rejects from EastEnders. Back to the unicorns, ogres and wizards…

Enjoy the rest of your weekend, Faithful Followers.
(There’s someone looking over my shoulder as I write this – I wonder what he’s thinking…)