Good evening from the Lifestyle Support Guru! Today’s long but important message is about how 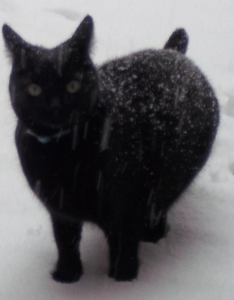 Molly in the snow

to DEAL WITH AN EMERGENCY in a cool, calm and collected manner. And all in 20 easy-to-follow steps! It starts off with a sad story, I’m afraid, but it has a happy ending (well, sort of!).
1. Open back door at 7am to let one cat out and look for the other one who decided to stay out for the night (or so you think).
2. Find other cat (let’s call her Molly, although the identities have been changed to protect the innocent) lying on the garden path with a badly broken leg (that’s the sad part, I’m afraid). Bring her inside, phone emergency vet, say you’ll be there in about ten minutes.
3. Rush upstairs, dress quickly in nearest thing to hand (a bright blue hoodie with ‘ITALIA’ on the front in my case – tasteful!), go back downstairs and find Molly has crawled into large, black wigwam-style cat bed which she’s ignored ever since you bought it a few weeks ago.
4. Carry cat in large black wigwam out to car, place her carefully on front seat.
5. Realise you have shut the front door, and your handbag with house keys, mobile and purse is still in the house and there’s no way the emergency vet will allow you past their front door without the means to pay (they’ve already told you on the phone what the ‘basic’ cost will be – the offer of an arm and a leg won’t cover it!).
6. Dash up to young man unloading stuff from a white van in the street and ask if you can borrow his mobile to ring friend who has a spare key. Unfortunately it’s a smartphone (you’ll remember my story of NOT buying a smartphone!) so he has to show you how to work it. Drive round to friend who eventually finds spare key.
7. Drive back home, collect handbag and head off to emergency vet’s, getting stuck in morning traffic which is worse than usual because of road closures.
8. Get to vet’s and find the doors are locked because it’s so early and the intercom isn’t working and you have to ring them to say you’re outside. By now it’s almost an hour since you put cat in car.
9. Vet gives Molly a VERY strong painkiller (methadone!) and says you can take her up to your usual vet for further treatment because they should now be open and it’ll be cheaper for you ( although ‘cheaper’ is a relative term when talking about vet fees!).
10. Get to usual vet – still carrying cat in wigwam, which calls for some very strange looks – who says Molly will have to stay in overnight while they x-ray her and operate tomorrow.
11. Dash back to friend’s house to return spare key and have soothing cup of coffee and two slices of toast.
12. Get home, answer/send some important emails.
13. Take hoover upstairs and realise you haven’t got time to do that because you need to shower and change before meeting friend to go to cinema.
14. Step on bathroom scales while waiting for shower to warm up.
15. Step quickly back off scales in horror and realise that your plan of losing two stone before going to Australia will have to be revised and that 2lbs is now a more realistic goal. Then comfort yourself by remembering you’ve had two slices of toast so that’s obviously got to be taken into account!
16. Call in at bank and while there get call from vet to update you on Molly’s progress and, as you are talking, for some unknown reason a contact lens comes out so you hold carefully onto that while trying to take in everything the vet’s saying.
17. Ask bank cashier if there’s somewhere quiet you can go to put contact lens back in so she sends you to the waiting area for people who want to borrow money so every few seconds someone comes past and asks if you are being seen to, which is mildly amusing because you’ve got your finger stuck in your eye trying to put the lens in!
18. Go to cinema café, buy caramel slice as comfort food, head into cinema, settle yourself down then, 10 seconds before the film starts, find you’re in the wrong seats so you have to annoy everyone by shuffling past them to get to the correct seats. (Why couldn’t the curmudgeonly old fogeys who asked us to move just have sat in our seats which were only on the other side of the aisle!)
19. Walk home after film so that you can kid yourself you’re walking off the caramel slice from earlier.
20. HAPPY ENDING – get home and find the wine you ordered three weeks ago has been delivered (and is sitting behind your wheelie bin)!