Lifestyle Support Guru here – I have had my first request for advice from a follower (such glory!) and I thought it only fair to share both the problem and my advice with my own audience so that you may all benefit in the future, should you come across the same problem. Here is the dilemma, as sent to me by the ever-fragrant, ever-sprightly and ever-Welsh Sue:

“I need advice from my Lifestyle Support Guru (step up please, LSG) what should you do if a lady gets out of car next to you in car park and begins to walk off with her husband when you notice she has her dress tucked into her knickers at the back. Delicate situation! Do you:
A. Ignore and let her carry on
B. Run after her shouting ‘Hey, Love you’ve got your dress tucked in your knickers
C. Run after her and have a quiet ‘dress in your knickers situation, word
D. Brush against her and pull said dress out of knickers in scuffle
I did one of above and did not have response I expected. So now you know it wasn’t A.
Advice needed please LSG for any future such situations.” 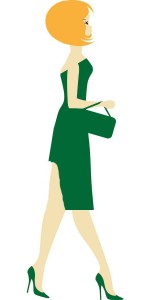 Woman with dress tucked up

Now, many of us will have been in a similar situation, either as the onlooker or, heaven forbid, the ‘tuckee’, if I may use such a word. (And don’t think I’m excluding you guys from being the one with the dress tucked in the knickers – as I’ve said before, the LSG has a completely open mind on such matters.) I personally have been in a similar situation when wearing a long white mac in a pub in Cardiff, the mac in question having become tucked into the waistband of my trousers so that, when I stood to go to the toilet, the mac trailed behind me. I like to think that I looked rather ethereal as I floated (the LSG floats rather than walks) to the toilet, white train billowing behind me, so I was rather hurt when one of the company said something about ‘the bride of Godzilla’, but I digress…
Sue, you have given a choice of four possible solutions, all of which seem reasonable, but I have to say that you have left out a fifth and, possibly, the most likely option – the said woman had actually CHOSEN to wear her dress tucked into her knickers! It may not be easy to get to grips with this idea in your own mind, but believe me when I say that there are some VERY STRANGE people out there (and especially in the more western and northern parts of Wales and in some of the eastern parts of England. I shan’t even mention Scotland or Ireland…). She and her husband may well have decided that this was a way to bring some romance and fun back into their relationship and any intervention could have spoiled the blossoming of a whole new section of their journey through this vale of misery and tears.
In fact, have you considered that the man in question may not even have been her husband – that puts a whole NEW perspective on the whole thing!
On the whole, I prefer to go with the advice of a dear friend of mine, whom I shall call Confucius for the sake of his anonymity: “When woman have dress tucked in trousers, leave alone as she may be in need of cooling breezes.”
I hope this has helped, Sue.